Were you or a loved one sexually abused by Dr. Johnnie “Jack” Barto, a Johnstown, Pennsylvania pediatrician? Our experienced attorneys can help. Our team has:

Learn more from an experienced doctor sexual abuse attorney by calling today for a free consultation.

Dr. Barto, 71, has been accused of sexually abusing over 30 children, in what police investigators call a “pervasive and prolonged pattern of abuse.” He was arrested in January and charged for molesting a 12-year-old girl during an office examination a few weeks prior, according to the Post Gazette.

We believe that survivors deserve a voice. Dr. Barto has been arrested and charged, but he has yet to be held accountable to his victims. Our experienced Pennsylvania sex abuse attorneys are here to help. If you or a loved one were sexually abused by Dr. Jack Barto, we can help you raise your voice and demand justice. There is no excuse for the sexual abuse of children.

You are not alone. We believe you. For too long, sexual abuse survivors have been swept under the rug, but change is coming. You can fight back. We believe that some sexual abuse survivors may be eligible to pursue accountability by filing a civil lawsuit. This is a case separate from the criminal proceedings against Dr. Barto. The pediatrician can be held accountable.

To learn more about your powerful legal options, contact our dedicated legal team for a free, confidential consultation today. You pay nothing until we secure compensation in your case. Learn more today. There’s nothing to lose in reaching out for help.

Dr. Barto is now awaiting trial, having pleaded not guilty shortly after his arrest. He is being held in jail on sexual abuse and assault charges stemming from over 30 cases, but sexual abuse survivors and their families have also laid the blame for the crimes on state health regulators.

Recent revelations suggest that nearly 20 years ago, state regulators for the Pennsylvania Board of Medicine were presented with a case involving Dr. Barto, in which the respected pediatrician was accused of fondling two small boys. Instead of pursuing their investigation, the Board of Medicine allowed Barto to continue practicing. He would go on to molest at least a dozen other children, prosecutors claim.

Why Did the Medical Board Reinstate Barto’s Medical License?

“It could’ve stopped with me,” says Lee Ann Berkebile, now 28, a former patient of Dr. Barto’s. “Instead, they chose to cover for him and stick up for him, and now look what happened. All you did was let a sicko touch other girls.” Now, families and survivors of Dr. Barto’s alleged abuse say the state Board of Medicine deserves to share in the liability for the harm caused.

Berkebile was only 4 years old when her mother took her to see Dr. Barto for a runny nose. After the appointment was over, the pediatrician offered to walk young Lee Ann down the hall to a medicine closet. There, she says, he jammed his hand down her pants and inserted a finger into her vagina. The assault was immediately referred to the Johnstown police, but they declined to pursue the case, citing the witness’ young age as their reason.

Four years later, a second family came forward. This time, a mother witnessed her own daughter sitting on Dr. Barto’s lap without any underwear on. The mother later told prosecutors that Dr. Barto had placed his hand on her daughter’s vagina for at least a minute. Thankfully, the state Board of Medicine this time took action, filing an administrative complaint against Dr. Barto that included both claims of sexual assault.

At an administrative hearing, members of the board were moved by the testimony from young Lee Ann and the other girl’s mother. Hearing examiner, Suzanne Rauer found them both credible and consistent, concluding that Dr. Barto had “sexually assaulted two of his very young patients,” while committing “grave abuse of his position.”

Dr. Barto was stripped of his medical license, but soon filed an appeal at the Board of Medicine. In a 7-2 decision, the Board reversed the decision confirmed in the lower hearing, reinstating Dr. Barto’s license and calling the allegations against him “incongruous to his reputation.”

Now, nearly 20 years later, the families and victims affected by Dr. Barto’s pattern of sexual abuse are incensed that he was allowed to return to practice. “I was livid,” says Kelli Bowman, mother of the young girl who Barto placed on his lap. “I was appalled they gave him back his license. I feel sorry for those kids. It’s all the medical board’s fault.”

Families have also cast doubt on the actions taken by the two medical practices for which Barto worked. Court records suggest that Dr. Barto was reported to staff members at both locations on multiple occasions, but he was never removed from practice. At one point, according to court filings, he even agreed not to treat teenage girls anymore.

Yet over so many years, Dr. Barto was never caught, despite the brave reports of family members and survivors. The case of Dr. Johnnie “Jack” Barto is truly tragic. Attorneys often stress the importance of reporting doctor sexual assault to the appropriate authorities, but in this case, dozens of reports went unheeded for years. 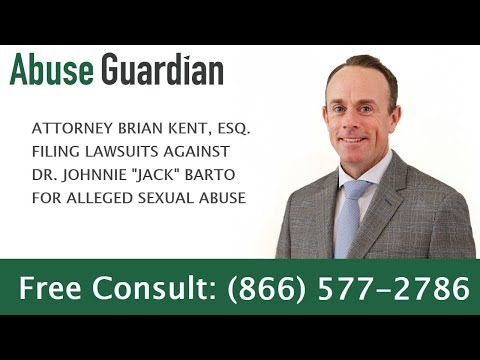